Making the Hard Choice to Protect My Marriage 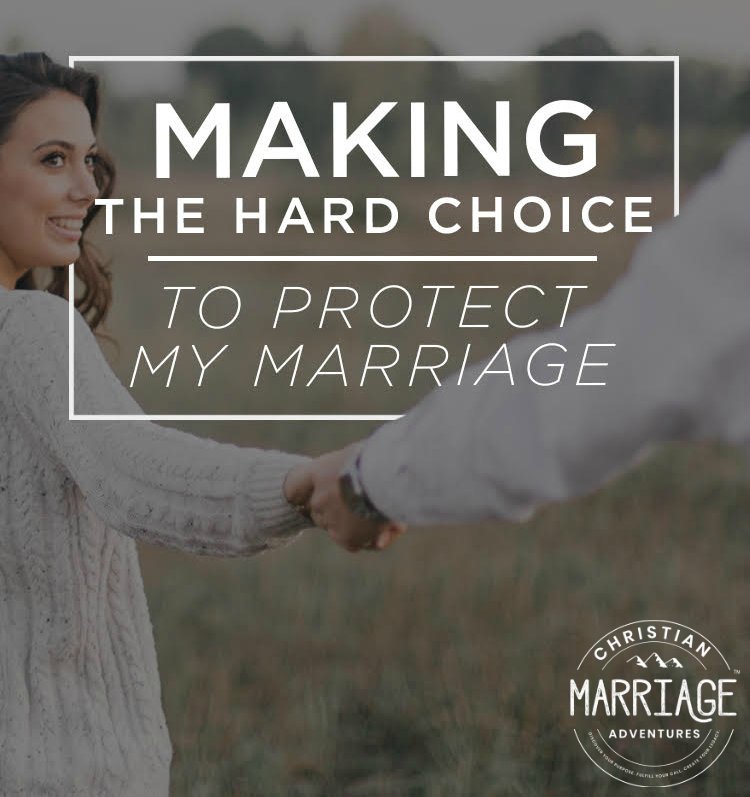 One question we are often asked is: How do I protect my marriage? While the answer isn’t always the same, we’ve found that it starts simply when you make the choice

Making the Hard Choice to Protect My Marriage

I don’t really have to tell him about this. (Or do I?) This really isn’t a problem. (Or is it?) What if he won’t let me take this class? I really want to take this class! The August sun briefly blinded me as it bounced from a misaligned mirror on a car in front of us.

“How Values Are Communicated Through Literature” was the class, taught by a teacher I’d grown to esteem. It sounded fascinating. Maybe I was over-analyzing—making a big deal out of nothing…. Yet, I was acutely aware of a commitment I had made to Roger before we married.

I once asked what he needed from me most of all, and he had answered, “I need you to be open and honest with me.”

“No problem,” I replied quickly.

“It won’t always be as easy as it sounds,” he gently warned.

He was right. It wasn’t. Today, it was hard.

OPEN & HONEST, EVEN WHEN IT’S HARD

Sweat from my bare legs dampened the cloth car seat. My heart battered my rib cage. Yet I resolved to be faithful to my commitment. So I cleared my throat.

“I need your advice,” I continued. “I don’t think there’s a problem, but I registered for a class, and now I’m wondering whether I should take it. The very thing that makes the class attractive also causes me to question it. That is, I will receive lots of one-on-one attention from the teacher.”

“I really like this teacher,” I confessed wistfully. “I respect him. He challenges and inspires me to do my best. But I’m a little concerned because, well, I seem to be thinking about him an awful lot lately….”

A siren sounded in the distance.

“My response to him is strictly platonic, intellectual,” I asserted. “But protecting our marriage is my first priority. Given the stakes, I don’t want to take any chances. So I thought it would be good to ask for your opinion. What do you think I should do?”

Hmm. Evaluating my physical/emotional response to the teacher, I had to admit that when I talked with him my palms sweat and my pulse quickened. Probably not a good sign. (I’d say I failed the first test.)

Reviewing the content of my thoughts, the second “voice,” I proudly acknowledged that my thoughts were chaste. But I was soon humbled as I remembered: “Pride comes before the fall.” (Prov. 16:18)

Tuning in the third and final voice, with great sadness I realized that I had the undeniable impression the “voice” of the Spirit was warning me: “GET OUT!”

Two of three voices told me I was headed for trouble. What should I do?

I am thankful that Roger does not try to control me. Throughout our marriage, he has steadily refused to make my decisions for me (even when I thought I wanted him to). Instead, he will offer his best counsel and leave my decisions to me. So, as I candidly described what I thought I’d heard each voice say, I knew I would remain free to take the class.

After talking with Roger, I thought about what I’d miss if I dropped the class. This instructor obviously had a passion for teaching, a passion for writing, and a passion for life. He had a extraordinary way of painlessly exposing my weaknesses and magnifying my strengths. I thrived under his tutelage.

During the previous semester, I’d gotten into a habit of staying after class to discuss my papers with him. On a few occasions, I’d called him at his home to ask specific questions about my assignments. I’d even interviewed him for my final class project. In the intimacy of the interview, I learned a great deal about his personal life. He struck me as a fascinating man, worthy of admiration.

No doubt, giving up the class would mean losing a great learning opportunity. But, then again, taking the class might teach me more than I wanted to know.

Although I was reluctant to admit it, I knew what I needed to do.

I withdrew from the class the following day, wondering what I would say to the teacher. It felt awkward, especially in light of how excited I’d been when he described the class over the telephone, and again when we had talked about it in great detail the day I had registered.

FIRST A STORM, THEN PEACE

Over the course of the next three days, I experienced an emotional chaos that took me by surprise. I felt depressed, irritated, rageful, weepy, and then, finally, peaceful.

In hindsight, I realize that I could’ve spared myself some of this anguish, and perhaps even been able to take the second class, had I earlier maintained instead of crossed certain boundaries:

To his credit, the teacher had referred me to several female teachers on staff at the college for additional mentoring. I should have pursued them.

But I didn’t understand that at the time.

It’s true that some attractions may be inevitable. Some relationships develop a dangerous chemistry through no fault of either party. If that occurs, what happens next is up to the integrity of the individuals involved.

Years later, I am grateful for my decision to drop the class. I did find other mentors and learned those things the course would have taught me. Today, I still have high regard for the teacher, but, thankfully, my highest regard is reserved for something I can’t get anywhere else—the prevailing purity of my marriage.

(NOTE: This story was originally written in the first year of our marriage. We will soon celebrate our 23rd wedding anniversary.)

ABOUT THE AUTHOR: Stacy fell in love with Jesus in 1991. She has homeschooled her two sons for more than ten years with the support of her husband of more than 20 years. She cares deeply about helping students cultivate and defend a biblical worldview. To that end, she founded Home School Adventure and created Philosophy Adventure, The Wise Woman with Literary Analysis Journal Questions, Philippians in 28 Weeks, the Mere Christianity Critical Analysis Journal, and Creative Freewriting Adventure. You can find her blogging at HomeschoolAdventure.com.