A Tale of Two Marriages Sabotaged by Social Media

“Sam” and “Susan” were friends in high school who never dated. They had friends in common but hadn’t socialized in person for many years, until Facebook brought them back together as “friends” online. Both were having marriage problems and unwisely shared hints and sometimes details of these problems on their Facebook status updates — after all, virtual friends might have some good advice. Picking up on Susan’s hints of frustration, Sam started sharing details about his marriage challenges in personal messages to her, and she began to open up about her struggles.

It was innocent at first: Christian friends helping each other talk out issues. As they commiserated online, both feeling hurt by their partners and finding comfort in someone who understood their pain, they became close. Then they started to meet in person. Not long after, they began an affair. 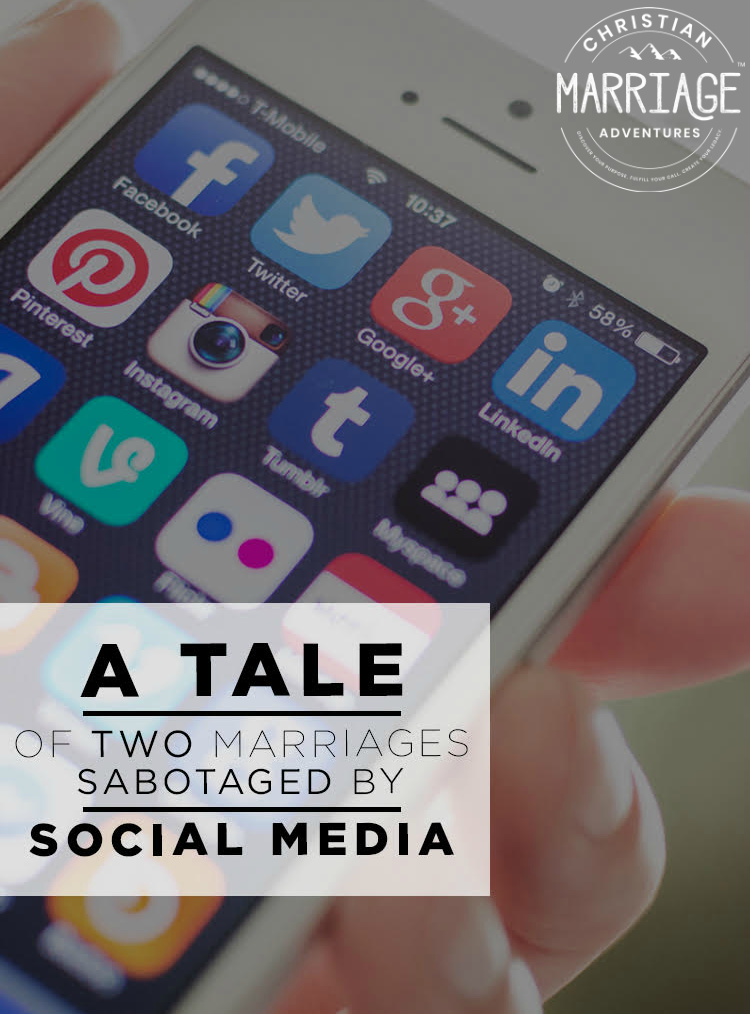 A Tale of Two Marriages Sabotaged by Social Media

Two marriages sabotaged by social media. Two families broken apart in a very real way by what started out as a virtual friendship. Two friends for whom I pray to find spiritual and marital restoration through the healing power of their Savior.

Social media adds a new twist to a very old story. Adultery is nothing new: It made the Ten Commandments list, penned by God himself (Exodus 20:14). So can we really blame Facebook for what happened between these two believers? If their marriages were already on the rocks, weren’t they just as likely to cheat with a “real life” acquaintance?

Actually, I don’t blame Facebook. And I don’t really “blame” them — though I do believe they are responsible for their disobedience and will live with the consequences of their sin. I do blame the enemy, who stalks us all like a roaring lion and did his best in this case to devour them (1 Peter 5:8). Here, the enemy used a new tool to fuel the discontent and amplify the same lies that lure us away from God, away from our marriage, and into the arms of another deceived and disobedient person.

That said, I do believe social media is further blurring the boundaries of friendship between married people of the opposite sex. What is considered “safe” banter online can quickly slide into murky waters when the communication becomes too personal. Likewise, airing your marriage grievances online opens a public Pandora’s box of comments, opinions, arguments, and division that is almost impossible to rein in once exposed.

How can we as believers wisely interact on social media without opening unwanted doors or falling into temptation ourselves? Here’s my personal list of social media do’s and don’ts for married couples:

Do: Accept “friendships” online wisely, taking pause to consider the purpose of the connection. Do you really need to know what’s going on with that friend of the opposite sex on a regular basis if you have no current reason to interact with them? Can you “friend” both members of the couple, not just your friend of the opposite sex? If you don’t know the new spouse (say you’re old college pals), why not use the opportunity to get to know them? They could be great “couple” friends for many reasons.

Don’t: Use a business connection as an excuse. If you’re worried about losing touch for potential business or career reasons, can you just ask that friend for a good email address to stay in touch instead of being connected on social media? If you have a Linked In account, can you connect there? Although Linked In is structured similarly to Facebook, people are sharing professional news and comments there, not personal problems and selfies on the beach.

Do: Keep your marriage discord off the public news feed. In fact, I believe in keeping details of my marriage challenges confidential always — offline and online. My husband and I made an agreement early on in our marriage to keep our struggles between us and God, and to seek the counsel of a pastor or professional if need be. There’s really no productive reason to involve others who aren’t in a position to bring you closer to God and each other, and that’s the goal.

Don’t: Pry into the problems of other couples. Maybe you have friends who unwisely choose to air their own dirty laundry on social media. Don’t get caught up in the drama, don’t take sides, and be careful about what you say in response. My “go to” comment is that I will most certainly pray for both parties to seek the Lord for wisdom and find strength and solutions in Him alone. Point them to their Savior and pray for repentance and reconciliation — that’s what they really need.

Do: Share your log-in and password information with your spouse. This sounds so simple, but I know very few friends who even think about having access to their spouse’s accounts. Why? I think we’re afraid that if we ask, it means we don’t trust them. So do your spouse a favor: Offer it. If he or she doesn’t offer it back in return, then you probably need to have a conversation about that.

Don’t: Engage in private, personal conversation about your spouse or marriage with any friend of the opposite sex. Really, why? There’s NO good reason for this. If this friend contacts you personally to share marital problems or ask for advice, point them back to their pastor and leave it at that. Let them know that you AND your spouse will be praying for them. If you have any reason to question their sincerity, don’t respond at all and disconnect the friendship.

Do you have any social media do’s and don’ts of your own to add to this list? Are you ready to take a serious look at your social media connections, and protect your marriage by closing the virtual doors to these potential pitfalls? Did you learn any of these lessons the hard way? If so, what has God taught you that you can share with others?

Renée Gotcher is a wife, writer, entrepreneur & home-educating mother of three daughters: Audrey, Claire and Elise. A former journalist, Renée was homeschooled during her last two years of high school and started homeschooling in 2010. She is editor of NextGen Homeschool and blogs on personal topics at A New Chapter. Her family lives in Castle Rock, Colorado.